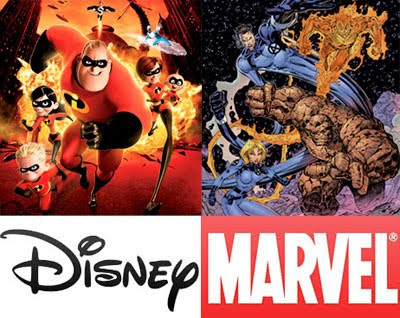 There is no doubt the 'comic' story of the week, if not the year, is that Marvel has been acquired by the world’s biggest Mickey Mouse outfit; Disney for $4 billion dollars.

While Marvel will benefit from Disney’s global presence and relationships, it is also hoped that the acquisition will give Marvel the ability to run commercially acclaimed, weaker selling titles, and even expand into lines of non-superhero comics – without having to measure them again such tight bottom lines. Disney say they will be treating the ‘House of Ideas’ a lot like Pixar, with a ‘hands-off’ relationship, that still sees Marvel in control of the direction of it’s characters.

MY VIEW: Like most of you I’m surprised by this move, especially by the price tag – just $4 billion? To me I would’ve thought the Spider-Man franchise alone would have fetched that much. Had I known Marvel’s library of over 5,000 characters would only cost a few billion I might have started saving myself!

Joking aside, apart from Pixar’s efforts and the Pirates Of The Caribbean trilogy, I’ve always been more of a Warner Bros/Looney Tunes fan then a fan of Disney. While they are quick to negate the idea, as a comic fan there’s an automatic worry that Disney’s more 'conservative' story content and workplace conditions, will somehow take some of the edge off the independent risk-taking Marvel, a company where one of the biggest franchises, the X-Men, is built on hard-hitting issues of segregation and discrimination.

While only time will be the decider on that one, a strong Marvel means a strong comic industry – now backed by one of the world’s biggest entertainment brands, today spells not only a great investment into the medium, but a strengthened vision for it’s future.

THE BIGGEST BREAK: Pixar making Marvel Animation From Deadpool breaking the fourth wall and ’finding Nemo’ to a stunning cosmos spanning epic Silver Surfer movie this is a endless golden ticket, for entertainment fans everywhere.
Posted by IADW at 9:49 am