I PITY THE FOOL: First Official
Image of the New 'A-Team' Released 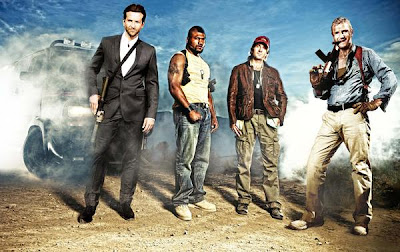 With 80's remakes of late their own brand of evil, we get the first official image of the A-Team movie, and it actually looks pretty bad-ass. With a wicked van, heaps of over-the-top violence, a classic theme tune, and the iconic Mr T, the A-Team were hardened Merc's on the run "for a crime they didn't commit".

Rampage Jackson has big gold chains to fill stepping into the role Mr T made infamous, but with Liam Neeson's awesome acting chops in the mix anything is possible. In fact with Jessica Biel also in the cast (why isn't she on this poster!! (Sobs)) audiences just might be saying "I love it when a plan comes together" when the movie's released June 2010.
Posted by IADW at 9:19 am