November: the month where Guy Fawkes tried to blow up the Houses of Parliament, Marvel and DC look to blow up fans pre-Christmas budgets, with a slew of one shots and new releases, including;

HIT PICK TO CLICK: PLANETARY #27 (Warren Ellis / John Cassady) The explorers of the bizarre conclude their ground-braking Wildstorm series in this oversized issue, as Elijah Snow makes one last errand. 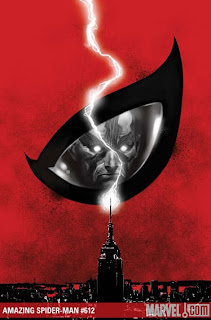 DC COMICS: Outside the Blackest Night Tony Bedard takes Grant Morrison's Asian based super-hero team for a spin in THE GREAT TEN #1, and for fans of pulp Brian Azzaarello's BATMAN/DOC SAVAGE SPECIAL brings the heroes face to face, in an alternate noir-ish DC Universe.

COVER OF THE MONTH: AMAZING SPIDER-MAN #612 A jolt of 1,000 watt design sees Marko Djurdjevic's use the strong iconography set this cover alight. The Empire State Building, and the eye shape of Spider-Mans mask, creates a dramatic image heralding the return of my favourite Spidey villian; Electro.
Posted by IADW at 10:30 am