ACHILLES, ALKYONE AND
THE RESPECT OF GAIL SIMONE 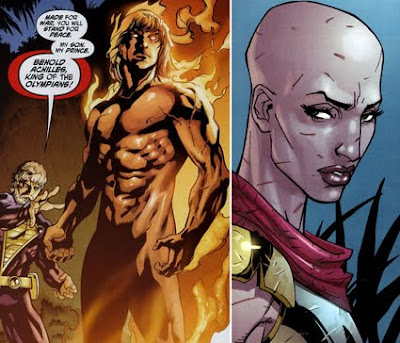 '09 is a great year for writer Gail Simone; with two top-notch books under her pen, she is a driving force in fund-raising for the medical expenses of legendary scribe John Ostrander, has helped obtain Wonder Woman a weekly feature and forum on ComicBookResources, and has followed in the footsteps of writers like James Robinson, by having Achilles and Alkyone develop as gay characters in the pages of Wonder Woman, through the story rather than as the story.

While Gail's Achilles has been tasked by Zeus with overseeing the impregnation of an island of Amazons (which is as ironic as a post on the 'non-marketing' of a characters sexuality, yes I know), she isn't exactly re-writing the history books. In true Greek Mythology, Achilles played both sides of the field. Whereas in the movie Troy, the warrior was enraged over the death of his 'cousin', legends state that Achilles and Patroclus were actually lovers. 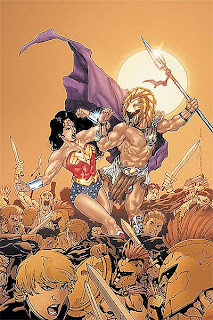 That aside, in the months since their respective comic debuts, the orientation of Achilles and Alkyone has only been confirmed by Gail here and here. No press-releases, splash-pages or issues devoted to the subject, just respectfully continuing the story and letting the details develop as the plot unfurls.

As a former councillor for people on all sides of this and other 'social issues', I have to say, if this 'non-issue' attitude and approach happened for every character whose race, religion, sexuality or gender was different from our own, what a great trailblazer the comics industry would be.
Posted by IADW at 7:10 am