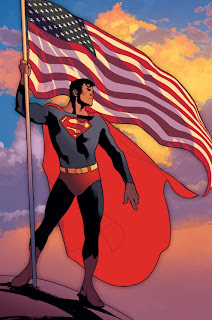 Superman may ‘leap tall buildings in a single bound’ but when it comes to his movie franchise, movie execs don’t expect Kal-El to get off the ground floor anytime soon.

Infact a recent report on Thompson on Hollywood levels many recent rumours, with Warner Bros suits stating the franchise has been placed on “indefinite hold”, that neither the Wachowski brothers (the Matrix) nor James McTeigue (V for Vendetta) have ever been approached to do the project, and that no writers are currently working on a Superman film.

No awards go into figuring out why the project has been shelved – the execs point out while a strategy is been developed for DC, 'Superman' has taken a back seat until the legal entanglement with the heirs of his creators has been resolved.

"It's about who controls what divided rights going forward and who owes what to whom when," TOH reports "Warners may be trying to settle with the Siegel and Shuster families, who in 2013 will retrieve the copyright of the Superman material published in Detective Comics' Action Comics Vol. 1, in order to merge all the Superman rights."
Posted by IADW at 9:42 am