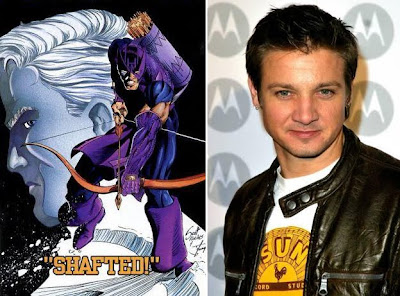 Cauliflower. Flared Jeans. 'Emo' Haircuts. You wanna know another thing I don't buy? Marvel saying 'Captain America, Iron Man, and Thor are the heart of the Avengers'. Sure they are the biggest names in the teams line-up, but my money has always been on Hawkeye, Cap, Vision, and the Scarlet Witch providing the base for the adventures of Earths Mightiest Heroes.

However current Marvel continuity has Hawkeye running round dressed as someone else, Caps body possessed by his arch-nemesis after his spirit fell through time, Vision - well I'm not quite sure how to word what Vision is, and Scarlet Witch creating a new life in Wundagore, after losing her mind and trying to rewrite reality, so I guess I'm not on that good of a batting average.

Switch to 'Marvel movie continuity' though and today I got a massive boost. A quote in the latest edition of Empire Magazine, as reported by Superherohype, suggests the House of Ideas is looking at using the sarcastic bowman Hawkeye, as a tie-in to the Avengers movie - like Samuel Jackson/Nick Fury was used at the end of Iron Man.

While he didn't state he had the part, actor Jeremy Renner told Empire "Hawkeye could be interesting. [Marvel Studios are] going to send me some stuff on it, see what it is, but I think they're pretty awesome, trying to make superhero movies almost plausible and not just some fantasy thing." Fantasy or not, with Hawkeye joining the 'big 3' on the big screen my interest in this film has just doubled for about the eighth time since the project was announced!
Roll on 2012 - AVENGERS ASSEMBLE!
Posted by IADW at 6:30 pm