Give the gift of comics this Christmas! Sure half the books out there currently feature either the dead rising or an America over-run by super-villains, but hey with all the 'happily ever after' Christmas TV movies on the way - by Decembers end everyone will be looking for something to balance the scales.

HIT PICK TO CLICK: BLACKEST NIGHT: WONDER WOMAN #1 Two words ensure the jaded cynics in all of us the 'big changes' promised in this mini-series will be delivered: Greg Rucka. Last time the writer had Wondy face to face with Maxwell Lord, she snapped his neck in the name of peace - now he's back from the dead to return to favour.

CLOSE CONTENDERS:
MARVEL: 'No I'm Spartacus' rings a bell in the pages of CAPTAIN AMERICA: WHO WILL WEILD THE SHEILD, and fellow one-shot; SIEGE: THE CABAL, sees Doctor Doom finally put Norman Osborn in his place, but that might just make things worse... DARK HORSE: The duo of Mike Mignola and Richard Corben unleash the HELLBOY: THE BRIDE OF HELL special DC COMICS: The final issue of FLASH: REBIRTH hits, BLACKEST NIGHT #6 slips into stores Monday, 30th 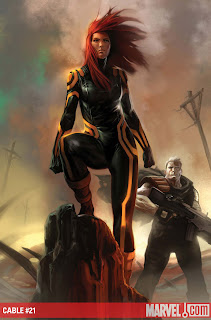 Dec, and the 'never met a reader who didn't like it' JLA: YEAR ONE by Mark Waid gets re-released just in time to soak up that Christmas gift money you thought you had spare.

COVER OF THE MONTH: CABLE #21 Sure Cable looks a little dodgy lurking in the background, but the time displaced Hope looks amazing thanks to the mad skills of Marko Djurdevic. Plus she's got red hair and green eyes! Could this be the long, long, long overdue return of Jean Grey to the X-Men? 4 outta 5 psychics remain optimistic.
Posted by IADW at 11:43 am