WORKPLACE WISDOM FROM
'THE SUPERMAN GUIDE TO LIFE' 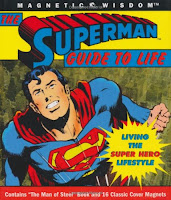 Its a common trait of being a comic fan that the price of that fact been public knowledge is a lifetime of comic related birthday and Christmas gifts, which regardless of what character you are in to generally feature Superman. While I can think of worse punishments, one of those gifts has been 'The Superman Guide To Life' a mini boxed set of '16 classic cover magnets' and a book of 25 ways to be your own 'Man of Steel'.

Flipping through it yesterday in one of those random "I remember this" moments, I thought I'd share Super Hero Precept #21: Know Who's The Boss, for all those struggling to deal with the working week; For all his adult life, Clark Kent's boss has been one guy: Daily Planet perennial Perry White, a man with a big heart and a big temper.
Sometimes, he seems like a villain. Sometimes, a hero. No matter what the scenario, White is always in charge. Any decision that Clark makes at work takes that fact into account. For the wrath of White is almighty.
Understanding where power lies-how to deal with it, how to work around it-is a key to success in any line of work. Whether your boss is a learned, judicious superior or a petty tyrant who got where he is through nepotism rather than a set of worthwhile skills, as an employee you must understand the limits of your relationship - to know when to push and when to back off.
Just because he can turn into Superman at the drop of a headline doesn't mean that Clark can overly undermine his superiors.
No, Clark knows he has to remain respectful-even deferential to the cigar chomping editor.
That may not seem like the best option in every situation. But in the long run, Clark values his job at the Daily Planet and respects the work that his boss is doing. Even if he's doing it in a very un-Clark like way.

And you thought Clark's boss was Lois! To get your hands on your own cool set of Superman magnets and lifestyle guide click here.
Posted by IADW at 7:03 am