The Dark Knight had all other movies beaten before it even entered the cinema. With a viral marketing campaign like few had seen before, the whole web was littered with hidden messages, clues and riddles designed to whip fans into a frenzy over the films encroaching release. Today Iron Man 2 started down the same road, releasing this image exclusively to SuperheroHype. 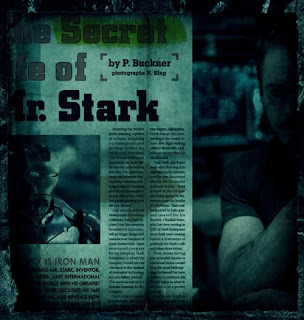 Continuing inline with the newspaper background of yesterdays Whiplash poster, the news clipping covers the events of first Iron Man movie, with the word 'Secret' mysteriously highlighted in the heading.

What this bodes for the eagerly awaited 2010 release will become clearer as more images are found. Keep track with where the Iron Man 2 viral campaign is, and join in putting the clues together, right here on It's A Dan's World, in the Iron Man 2 Update section on the right ->
Posted by IADW at 7:58 am