In January, as part of DC's Blackest Night event, 8 classic titles rise from the grave for one more issue. However over a dozen books can be a bit of a hard ask for any New Years comic budget, so to help you decide which to grab, here's the wrap on the latest in our 1-0-1 series, the rise of The Phantom Stranger #42. 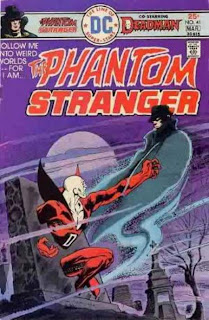 WHY YOU SHOULD CARE: Few characters are versatile enough to step between the worlds of the DCU and Vertigo as often as the Phantom Stranger. Immensely powerful, yet distrusted and unknown by many heroes, the enigmatic Stranger remains one of the earths first lines of defence against the supernatural.

To protect his air of mystery, DC once published a 'Secret Origins' for the Stranger, with four separate origin stories inside. Now his true origin stands to be revealed at long last, as forces conspire to find out the Phantom's beginnings, in the hopes of using it against him. With Blue Devil at his side, and the 'Black Lantern' Spectre and Deadman on his tail, does comics best dressed mystery man have what it takes to survive? Only writer Peter J. Tomasi (Green Lantern Corps), rising star artists Ardian Syaf and Vicente Cifuentes, and the readers of The Phantom Stranger #42 know for sure.

For more info on the Sage of the DCU, visit the iamthephantomstranger blog.
Posted by IADW at 2:03 pm