In January, as part of DC's Blackest Night event, 8 classic titles rise from the grave for one more issue. However over a dozen books can be a bit of a hard ask for any New Years comic budget, so to help you decide which to grab, here's the wrap on the latest in our 1-0-1 series, the rise of The Question #37. 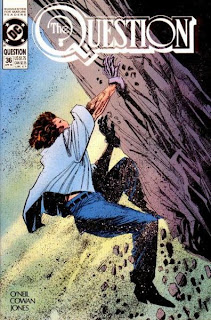 WHY YOU SHOULD CARE: If you need a hero whose not afraid of rolling up his sleeves and getting stuck in, The Question is your man, or he was. The guy who was the inspiration for Watchmen's Rorschach has now been replaced after death, by former Gotham City Police Officer, Renee Montoya. As the new Question she's taken on gangs and gods, with nothing but her smarts to get the job done, and more than enough elbow grease to see it through.

Hit writer Greg Rucka steps out from his current Batwoman run to bring the original Question, Vic Sage back from the grave, and looking for a showdown - faceless face to faceless face. Throw into the bru-haha one of the worlds best martial artists - Lady Shiva, and the original Question art team of Denys Cowan and Bill Sienkiewicz and you better take your seats! This fight is going to be a doozy!

For a great fansite on former flagship of Charlton Comics visit vicsage.com
Posted by IADW at 7:21 am