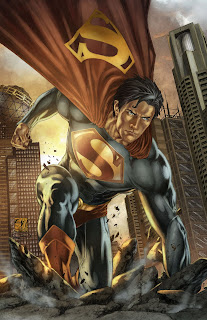 Jiminy Cricket said 'When you wish upon a star your dreams come true' and no one in comics knows that more than J. Michael Straczynski. In the first post of what DC's Source Blog promises will be a week of revelations, the publisher states that in 2010 JMS, an unabashed fan of 'The Man Of Steel' will finally get his wish; to script Superman... kinda.

A whole new decade sees a whole new universe from DC, titled EARTH ONE. Under this banner, the best creators unite on tales of comics biggest icons, set in a continuity free modern world. While that isn’t 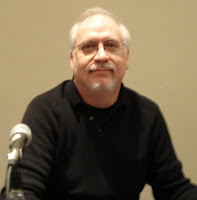 exactly Kryptonian rocket science, what makes this project unique is that it will take place in a series of original graphic novels, rather than in a traditional monthly comic format.

With two novels per series a year, BATMAN: EARTH ONE taps writer Geoff Johns and artist Gary Frank, to explore how a grief stricken boy turns into the night’s ultimate avenger, while SUPERMAN: EARTH ONE lets JMS and artist Shane Davis take Kal-El. and find what it takes to be a ‘Man of Steel’ in todays world.

The new novels, not only give greater exposure to the comics medium, for existing comic fans who can't afford all the current monthly 'Bat' or 'Super' books, they offer the ability to buy fresh new stories of the heroes in trade format, without having the story or repercussions spoiled for them online in the months in-between.

An interesting change of tack from one of the worlds largest comic publishers, while I'm not the biggest fan of trades or 'alternate continuities' I will be forking over a few bucks for Superman. Geoff and Gary on Bats will be magic, but this is an assignment JMS has waited for since he was a kid. As he himself states on Aintitcool.com:

"It's about respecting the character and his origins. Especially for me, since Superman has always been my number one icon growing up as a kid. Coming from poor surroundings and circumstances where everybody says "forget this idea of being a writer, guys like you who come from nothing always end up at nothing," Superman was what I held onto, the idea of someone who could do anything."