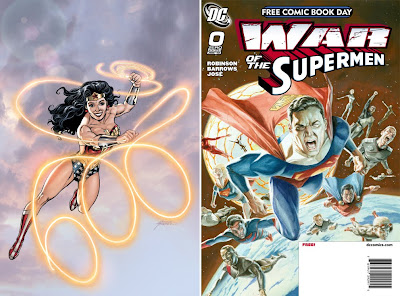 While the lines on her 'carved from clay' skin don't show it, if you add up all the individual series Diana has had since her creation, next June would see the amazon's 600th issue hit the stands. DC's Dan Didio chucked the challenge to Wonder Woman fans; 'You want a 600th issue - send me 600 postcards by Octobers end and tell me' He got 712.

As one of the postcard writers, I feel this move pays respect to the history of the First Lady of Pop Culture. With one of the most influential creators in Wonder Woman's 'life' George Perez nabbing cover duties for the milestone issue, DC is keeping the rest of the "all-star" creative team under wraps - only teasing of more major Wonder Woman news to come, early 2010.

The other big announcement of the day from the Source blog? Superman's going to war, and he's not the only one.

For months DC have teased the characters to watch in twenty-ten are Green Arrow and the Man of Steel. Now with brewing tensions between New Krypton and Earth, fans have been told that moment for Kal-El is WAR OF THE SUPERMEN - and no cows will be left sacred.

With few details revealed apart from the fact the event will involve all the 'Super' books, DC will be ensuring War of the Supermen is 'new reader friendly' by releasing a 0 issue primer as part of the worldwide Free Comic Book Day on 5/1/10.

For a few extra teases (including Batman's role in all this) check out the article at TimeMagazine.com
Posted by IADW at 6:34 am