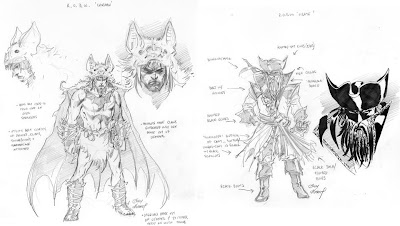 For months now the original Robin, Dick Grayson has been running round as the Dark Knight, after Bruce Wayne was zapped back to the caveman era at the end of Final Crisis. With Dick currently headlining the top-selling series Batman and Robin, among others, the change has done DC's Bat-books a world of good - but this is comics and worlds end all the time, this one next April, foretold by DC's The Source blog, with the aptly named mini-series; The Return of Bruce Wayne.

Written by Grant Morrison, the thought-provoking scribe hopes to remind fans how all gadgets and Batmobiles aside, Bruce is at his essence the ultimate survivor, by having each issue reveal how Wayne would survive in a different 'pulp hero' adventure setting. With each instalment (of 6) rendered by a different artist, to help convey it's chosen genre, by series end fans will have seen the Bat-Caveman, Bat-Witchhunter, Bat-Pirate, Bat-Cowboy, and the Bat-P.I.

For me the cost of admission is paid for more by the fact of seeing Bats as a 'Dark Knight of the Seven Seas', rather than Bruce's actual return. Still I get this is Batman, an icon you'd have to wonder 5 months into an amazon jungle to find a person who doesn't know the concept of, and I'd have to have more than a few bats in my belfry to think it was never going to happen.

Now with the 'when' sorted, I guess the question becomes 'Whereto from here for Dick Grayson?'
Posted by IADW at 6:32 am