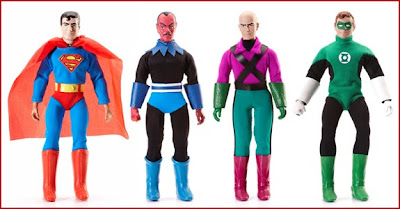 Right now the folks at DC must be looking like someone stole the hole from their doughnut.

In a wave of extra '2010 news' they announced; new editions of The History Of The DC Universe, an all-new 15 part Who's Who, the launch of Legacies - a 10 part 'from Golden Age to Modern Age' story by industry icons like Lein Wein, and Joe and Andy Kubert - plus the first art of the Scarlet Speedster from the upcoming Flash ongoing series artist Francis Manapul. Then along comes toy giant Mattel who beats them for 'coolest DC News of the day' and robs DC of being the ones to debut their 2010, 75th Birthday logo!

In a nod to the old 8" cloth-style figures from the 70's and 80's, Mattel is releasing a new line of 'action figures' called Retro-Action DC Super Heroes! Never mind the fact the 70's and 80's are now considered 'Retro' - how sweet are these prototype images? (Note the 'DC Comics 75')

Articulation and detailed sculpting be hanged - I think they kick it big time, and price dependant I might even snag the odd one or two to sit on the bookshelf.