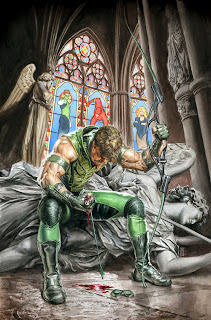 If the price of saving the world is an arm and a leg, after the recent events in Justice League: A Cry For Justice Roy Harper, aka The Red Arrow is half way there.

Now the fallout of that tragedy and the decisions that spring from it are going to be lined up in the cross-hairs of writer J.T Krul, who in March will helm the one-shot special; Justice League: The Rise and Fall #1, and the 4-part mini series; Justice League: The Rise of Arsenal (which sees Red Arrow re-adopt his former codename), while at the same time scripting The Fall of Green Arrow (which from the preview art sees the Emerald Archer in a costume like the one Oliver Queen wears on Smallville) starting with #31 of the ongoing Green Arrow series.

While little is being revealed on what exactly The Rise and Fall has instore for the League, Green Arrow or his former sidekick, Mr. Krul told IGN, that Roy won't just be snapping on a cybernetic arm like that of Captain America's Winter Soldier and be "good to go again" but how he compensates, will actually relate as to why Harper steps back from calling himself the Red Arrow. For the full interview click here.
Posted by IADW at 9:18 am