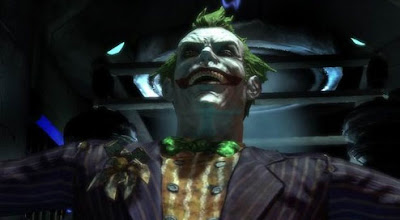 No game soaked up more daylight hours in '09 than Batman: Arkham Asylum. With the Paul Dini written beat-em up turning players into the Dark Knight in more ways then one, the hits kept coming at Spike TV's 7th Annual Video Game Awards, as the Joker's goons 'gassed the crowd' and the man himself (voiced by Mark Hamill) delivered a teaser trailer for a sequel, wrapped inside a giant green box.

While no official name has been released for the follow-up, the footage within the Joker's gift, not only unveiled the console based return of Mr J and the equally insane Harley Quinn, but it is also now available to those who missed it over at arkhamhasmoved.com.
Posted by IADW at 9:45 pm