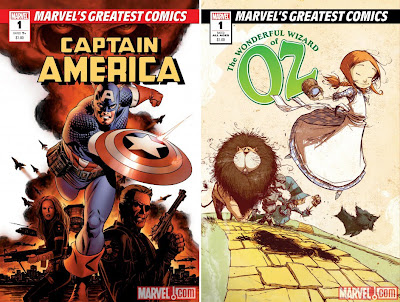 One of the best tickets in modern comics is undoubtedly and deservedly Ed Brubaker's Captain America. Now as part of the new 'Marvel's Greatest Comics' imprint, come March 2010 you can lay your hands on Ed's first issue of Cap for just $1.

Following the likes of Vertigo Comics, who have already had success with a range of $1 #1's, Marvel kicks their line off with FREE copies of Invincible Iron Man #1.

The new-printings add more punch to the statement 'you cant buy much for a dollar these days' and promise great reads for both casual and longtime fans. Launching weekly in March, the titles are:
March 3: INVINCIBLE IRON MAN #1
March 10: CAPTAIN AMERICA #1 (You need this one!)
March 17: WONDERFUL WIZARD OF OZ #1
March 24: THOR #1
March 31: PUNISHER MAX #1
Posted by IADW at 7:20 am