No, I don't mean that time the Muppets 'covered' Bohemian Rhapsody (although that was pretty darn cool), I'm talking about the comic book cover that told a story and forced your wallet to open, right then and there. Gone are the days were all it took was an excess of guns and grimaces, now there is real talent at work...

CLOSE CONTENDERS: As Barry Allen straps on his boots, Ethan Van Scivers Flash Rebirth #1 cover sees DC plays on the Flash iconography, by shifting the logo down below the point visible on some magazine stands. Over on Detective Comics #855 J.H Williams lll shows while you while you may have read a few 'bat books' in your time, you ain't never seen one as hot as this. 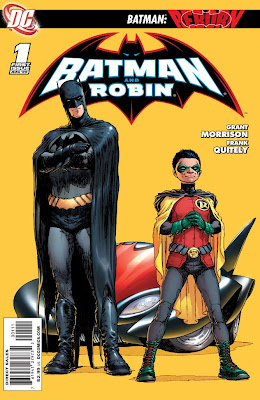 This is how you herald a bold new start. Frank Quitely is one of the modern day masters, and with this cover he gave readers all they needed to know about the new 'Batman and Robin' in one go.
Posted by IADW at 11:59 am