Here in N.Zed a movie ticket can cost you upwards of fifteen bucks, so it's more than a case of highway robbery if you fork out for a stinker. Thankfully there are still a few gems which have made the experience as tasty as the pack of Jaffas devoured during the show - now if only they could stop people txting...

NADS '09 BEST MOVIE TO EAT JAFFAS BY: THE HANGOVER 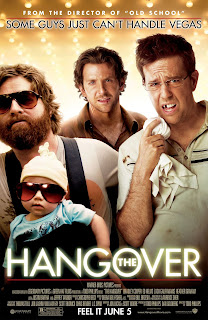 As an apology for anyone whose had to sit through a Police Academy movie, Hollywood offers this brilliant comedy, recommended for those in need of a little bit of pre-Christmas 'Ho Ho Ho'.

Plenty of gags are offered up, as in The Hangover, married teacher Phil, his friend Stu, and Alan - the bride's pervy brother, wake the morning after - dazed and confused - and begin to track the whereabouts of the missing groom, with a tiger, a chicken, and a random baby among their only clues.
Posted by IADW at 2:00 pm