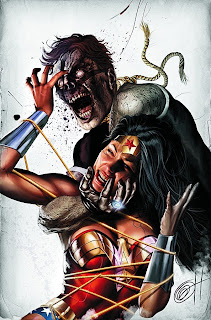 "Life is much more than seven simple colours"

It takes a brave soul to base a story of the dead rising in America's Arlington National Cemetery, let-alone emerge with their dignity and respect intact. Former Wonder Woman series writer Greg Rucka however, is no stranger to scripting great reads and while managing to do both, shows that there are few others who can match his grasp of the avenging amazon.

See Maxwell Lord had his neck snapped by Wonder Woman years ago, when he sought revenge on all capes by possessing Superman as his ultimate weapon. Now he's back from the dead and more then a little ticked - but despite his physical and verbal assaults, Diana's control of her emotions remains in check. Even when an army of Black Lantern rings fall on hallowed ground, her reluctance and shock of the outcome comes not out of anger, but from her heart. 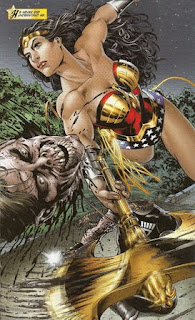 Now before you go off thinking the whole issue is a bunch of Mills and Boon, in amongst the phenomenal character work is plenty of axe-swinging, head-reattaching goodness, and topping it all off is the art. Oh boy the artwork. Under yet another polished Greg Horn cover, Nicola Scott blows the four colour ink off each of the 22 pages that bear her craftsmanship. Infact it is a testament to her and the colouring skills of Nei Ruffino, that the books four different inkers don't interrupt the tale at all.

If you're getting a little jaded on the 'Blackest Night' event, and are in need of a decent pick-me-up, or are just after one sweet little mini-series to follow into the new year, this issue, the first of three, is definitely good for what ails you.
Posted by IADW at 9:31 pm