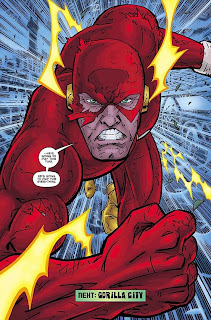 Remember that episode of Friends where Ross said something then took it back? Well right now fans of modern day Flash, Wally West, are bristling at a similar move by DC Comics, which will see plans for a Kid Flash solo series, and a Wally West back-up feature, in the ongoing book of 'rebirthed' silver age Flash, Barry Allen "put on hold".

With the original line-up of Flash titles a shaky, but accepted compromise by fans, on the back of what is sure to be one of the most controversial resurrections in comics history, this latest news seams only set to rub salt in the wounds of 'West' fans who don't feel Barry's return warranted the cancellation of Wally's own book.

For me The Flash falls easily within my 'top 5' - has since day one. While that position is split pretty evenly among the two main legacy bearers, I feel E.I.C Dan Didio's announcement at Newsarama, to pause Wally's own adventures and state that Barry will be the Flash fix for 2010, is akin to DC running into the new decade with it's shoes on the wrong feet. Sure they still do the job, but it's uncomfortable as hell and everyone watching just thinks you're mad.