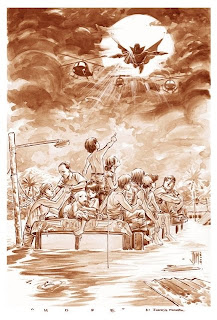 Upcoming Flash artist, Francis Manapul has tweeted this image he has done, to be included in a book created to raise funds for the flood ravaged Philippines.

Titled 'Hope' Manapul even manages to convey a 'down-home' feel in the middle of a natural disaster. In a similar style to his run on Superboy in Adventure comics, all the locals are perfectly rendered as they look to salvation from the skies. At first I assumed it was Superman flying to the aid of the isolated locals, now it looks more like Captain Marvel - nice choice!
Posted by IADW at 7:07 am