For more details stay tuned over the next few days for the 'DC 1-0-One Shot' Resurrection specials - where we look at whose in and on each issue, and more importantly why you should care. 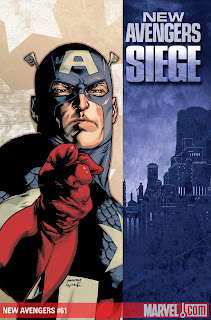 COVER OF THE MONTH: NEW AVENGERS #61 Okay so having Cap pull an 'Uncle Sam' isn't exactly original, but hey not only does artist Stuart Immonen fling the shield out of the park with this wee number, this ish marks the return of Steve Rogers as Captain America to the Avengers.
This means it should contain a healthy amount of a Cap whose had it up to here with all the 'Dark Reign' carry on, rounding up Clint, Hank, Monica and the gang, and setting out to get things sorted. Hence the finger pointing.
Posted by IADW at 6:49 am