WIN! Peter Jackson and Barrie Osborne On The Team Behind Your Next Short Film! 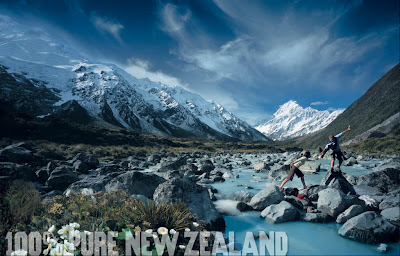 How would you like ‘Peter Jackson thought I was best’ or ‘My short film was produced by Barrie Lord Of The Rings Trilogy Osborne' on your CV? Sound to good to be true? Well, it may be a wet grey day here in Tauranga, but the folks at 100% Pure New Zealand are offering the world to one aspiring creative mind – and that could be you!

Simply jump over to your-big-break.com, grab a brief and entry form – absorb a few tips from the pro’s themselves; Jackson and Osborne - then chuck down on paper your awesome idea for conveying the spirit of ‘100% Pure New Zealand’ in a 3 minute short film. After a nice drink to toast your winning idea, pop it back to the guys at 100% Pure N.Zed before the 15th of January 2010, then round up as many people as you can find to vote for your masterpiece in the making!

Open to anyone, anywhere in the world, make the top five and you’ll find yourself flown out here, to New Zealand (or from city to city if you’re already here), to shoot your film with the help of Academy Award winning producer Barrie Osborne. The five shorties made will then be showcased, with the legend himself; Peter Jackson, picking the one film to rule them all!

For details it’s your-big-break.com you want to head to, the spectators can follow the action and entries live on either Facebook or Twitter. Judged by Peter Jackson, Directed by Barrie Osborne, Written and Directed by You - now those are some credits to be proud of!
Posted by IADW at 12:19 pm