YOU WILL KNOW MY NAME IS THE LORD WHEN I LAY MY VENGEANCE UPON THEE: Samuel L. Jackson To Write For Boom! Studios 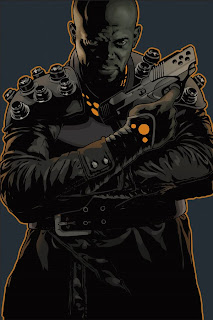 BOOM! Studios - the 'little' guys with HUGE hits like Mark Waid's Irredeemable, and licensed properties such as 28 Days, The Muppets and The Incredibles, are about to pull another rabbit from their hat, with news Samuel L. Jackson and his Afro Samurai co-writer/producer Eric Calderon, will script a book for the company titled Cold Space.

The book which focuses on an outlaw on the run, who crash lands on a hostile planet only to find money making opportunities in the war raging around him, will have the added bonus/stroke of genius of having covers provided by Dave Johnson (100 Bullets)! COLD SPACE, a tale of true pulp fiction, is a four issue mini series kicking off from BOOM! Studios this April.
Posted by IADW at 7:07 am