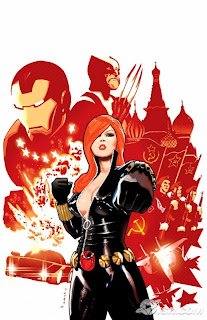 Yeah, Spider-Man does 'whatever a spider can', but when it comes to everything else, the arachnid you want at your side is the Black Widow. From leading The Avengers, to surviving the worlds deadliest spy circles, the lady's done it all - and if she hasn't, she will have by the end of 2010.

Hoping to spotlight Natasha Romanova's independent nature, writer Marjorie Liu (Dark Wolverine), hopes to infect pull-lists the world over, when she takes the Black Widow for a spin in a new ongoing series, announced today, by IGN.

With the secret agent supreme set to co-star in the highly anticipated Iron Man 2, Liu's revelation that the first story arc "will not be a spy story" but one that examines Natasha's place in the Marvel super-hero universe, may be a bit of a puzzling move, but it doesn't hurt that the art chores have fallen to the highly capable Daniel Acuna.

If his work, when the series kicks off this April, reaches anywhere near the level of magic he produced on Uncle Sam and The Freedom Fighters, 20-10 could well be 'The Year of the Spider' - just like Marvel has being saying, only not for the one they were originally thinking.
Posted by IADW at 7:23 pm