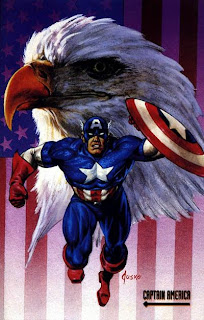 With the full moon safely past and The Wolfman set to roar into movie theatres, director Joe Johnston spoke with Boxoffice.com, letting slip a few spoiler-free hints as to what's in store for the Sentinel of Liberty, when Captain America: The First Avenger rolls into town.

“It’s not going to be a Captain America that you expect. It’s something different. It is influenced by the comic book, but it goes off in a completely different direction” teases Joe, “It’s mostly period-there are modern, present-day bookends on it-but it’s basically the story of how Steve Rogers becomes Captain America.”

With the above a pretty strong thumbs up to the fact Cap's WWll origins will be staying intact, fans could easily end up seeing Bucky, Master Man, Baron Zemo or predictably The Red Skull making an appearance. But what of the man himself; Steve Rodgers?

Pointing at Steve as the super-hero without super powers, Johnston challenges; “He’s an every man who’s been given this amazing gift of transformation into the perfect specimen-the pinnacle of human perfection. How does that affect him? What does that mean for him emotionally and psychologically?" He continues "You'd think he got everything he wanted. Well, he didn't get everything he wanted [...] For me, that's the interesting part of the story."

Now we're talking! To read the full interview (including what's up with Jurrasic Park 4) click here, otherwise to pass a few of the hours between now and the July 22, 2011 release of Captain America The First Avenger in style, be sure to pick up a ticket to The Wolfman, in cinemas this February 12.
Posted by IADW at 9:15 pm