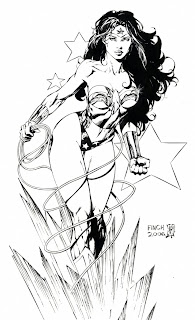 It doesn't seem that long ago that David Finch was making androids look more attractive then they legally had a right to be in the pages of Top Cow's Aphrodite IX. Now after a lengthy run through the halls of Marvel, on titles such as The New Avengers, comes word he's got a one way ticket to DC, having signed an exclusive contract with the publisher in the last few days.

While that's pretty much all that's slipped out of DC's Source blog on the steal, early speculation favours Batman as the target of David's sketching prowess. However, one quick look at this Wonder Woman commission done by the self-confessed DC fan shows Finch could easily find a home on any number of characters, from Captain Marvel to The Suicide Squad... And then there's the Wildstorm universe! I mean DC is one thing, but David Finch on The Authority?! Now you're cooking...
Posted by IADW at 1:11 pm