HOOK, LINE AND SINKER:
Why Brave and the Bold #32 is Worth the Coin 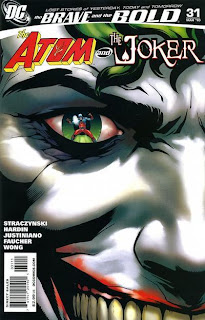 If you thought there was nothing fresh you could do with the Clown Prince of Crime, you obviously didnt pick up this weeks Brave And The Bold #31. In it, writer J. Michael Straczynski captured the voice, origins and motivations of The Joker like few writers have before him.

Able to breath new life into one of the most exposed villains in pop culture, you don't want to miss what JMS will do for an encore in March, when he grabs hold of another DC icon; Aquaman, in Brave and the Bold #32. 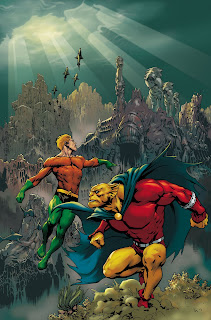 Teaming the King of the Seven Seas with Etrigan the Demon, if you've ever been an Aqua-fan or have seen Mera kicking butt and taking names in the pages of Blackest Night and want to find out about what's made her better half such an iconic character for almost 70 years, this will be the issue you need to pick-up.

While it's currently a sparse appearance diet in the pages of DC Comics, for fans of one of the world's most recognisable super-heroes, if enough of a swell gets behind the March 3rd release, who knows what it could bring.

In the lead-up, be sure to checkout other blogs on the net supporting the Return of Aquaman, like Nerdage, The Doom Patrol Blog and the rally leader, Rob's Aquaman Shrine.
Posted by IADW at 12:18 pm