AVATAR, 'IRON MAN' AND UP CLEAN UP AT THE GOLDEN GLOBES 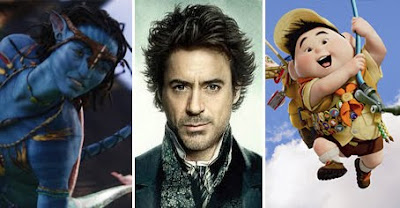 It was a night for records to be broken. Sci-fi and animation took home five of the core Golden Globes, and for the first time in 15 years the awards featured a master of ceremonies; Ricky Gervais. A man who in commenting about international causes dear to Hollywood stars quipped "You can be a little Asian child with no possessions and see a picture of Angelina Jolie and you think, 'mommy'".

Avatar, up for four awards, lost the first two (song and musical score) then had to wait the whole show to takeout the majors; Best Picture - Drama and Best Director, in James Cameron. The win cements the film's status as a front-runner for the Oscars, whose nomination ballots close this Saturday.

Pixar heart-warmer Up, also pockets two Golden Globes, taking out the award for both Best Animated Film, and Best Original Score, thanks to the work of Michael Giacchino. The best animation award marks the fourth time Pixar have won, having won all four prizes for animated movies since the category was introduced in 2006. Past Pixar winners are WALL-E, Ratatouille and Cars.

'Iron Man' Robert Downey Jr. won Best Actor Musical or Comedy for his efforts in Sherlock Holmes. Finally, while it's not sci-fi my other hit pick, Vegas bachelor bash based The Hangover won the award for Best Musical or Comedy, which is just as impressive, as like good ol' sci-fi, broad comedy also gets overlooked at Hollywood honours.

For a full list of winners in both film and TV, visit the Golden Globes.
Posted by IADW at 7:05 pm