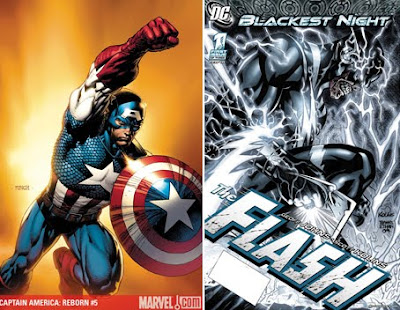 Captain America may not possess Thor’s Uru hammer but he has proven lightning can strike twice for Marvel Comics. With the Sentinel of Liberty their sole entry in November’s top six, deciding to spike their Christmas offerings with the one-shot Captain America: Who Will Wield the Shield earned the House of Ideas another top spot in the Diamond comic sales stats for December.

DC, with four of the top six spots, all Blackest Night related, slip back even further from Octobers 3% sales gap to rest on a unit share of 30.21% and a dollar share of 27.20%. The Cap lead charge saw their marvellous opposition claim 49.93% unit share and 37.85% market share in comparison. Wildstorm took out the top trade paperback spot with the 8th volume of Ex:Machina: Dirty Tricks.

THE WINNER ON THE NIGHT: Blackest Night The Flash #1. In one of comics best on again-off again relationships, hit writer Geoff Johns (partly responsible for half of the top six entries), returns to his favourite character with this particular title, alongside fellow former Flash partner in crime, artist Scott Kolins. While his last effort, mini-series: Flash Rebirth still suffers from delays, this placing shows the marriage of Johns and the Flash will always be sales gold for DC.

For the full wrap-up click here.
Posted by IADW at 9:20 am