SET TO SOAR: Simone returns to Birds Of Prey 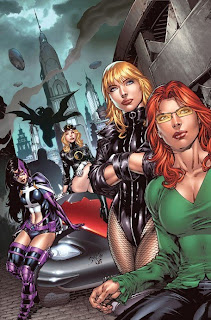 It's true birds fly north in spring, and this springtime DC's Birds of Prey will once again fly up the sales charts as part of the Brightest Day event, in an all new series, announced today, by artist Ed Benes and infamous 'Birds' writer Gail Simone.

After a lengthy four year stint on the books original incarnation, Gail made the title a flagship book on how 'women in comics' should be written, and a source of dam fine reading. Speaking to Comics Alliance on the return of the Black Canary, the Huntress and Oracle to the book many female readers used as a 'gateway' to the DCU and comics in general, Simone not only teased a possible Secret Six crossover but also why 'the year of Green Arrow' has just become 'the year of his significantly better half and her friends';

"Someone wants the band back together, and it's NOT the Birds. Zinda gets a date. A long-promised headquarters is built. Black Canary kicks ass. Huntress thinks a certain big league bat villain should be left to die. A bird is charged with murder. Another might be working for the other side. And Catman leaves a naughty phone message for the wrong person.

Everything's right because it's so, so wrong.