SPIDEY 4 DELAYED AS
SONY SAYS 'NOT SURE, VULTURE'

Spidey fans walked into Spider-Man 3 happier than a freelance photographer dating a New York supermodel, yet many walked out angrier than a high school outcast, dipped in an alien costume, that is eventually going to try and kill him. The film franchise which rebirthed 'comic movies' had come off the rails, death hung in the air and chances of resuscitation looked slim... But that was then.

Nowadays Spider-Man 4 has moved from a probable 'if' to a definitive 'when'. But with the villains making up for so many of the last films pro's and con's, Sony Pictures has decided to delay production, to give director Sam Raimi a chance to rethink his current choice of rouges; The Vulture, and Felicia Hardy as newbie; The Vultress. 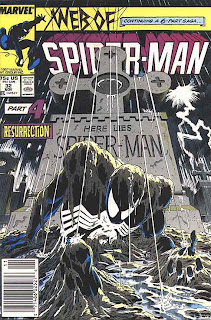 While Raimi could make the Vulture fly, with so much riding on the webs of Spider-Man 4, I too would lean towards a more 'bankable' set-up. Putting to one side, my favourite, Mysterio (whose mastery of special effects and illusions would eat up the box-office in a post Avatar 3D world), my fingers are crossed for a take on Kraven's Last Hunt.

The plot twists and turns of one of the most seminal Spidey stories of all time, would place 'fright master' Raimi in his element, while being a perfect inroad for Sony's wish, to have Felicia Hardy appear in her true comicbook guise, as that of the Black Cat. Insanity, pride and revenge, mixed in with guys and gals in cat gear wrecking havoc across New York? Sold! That's Spider-Man 4 sorted, who's next?

UPDATE: Spider-Man 4's delay has seen Thor claim Spidey's old release date of May 6, 2011. Meanwhile Thor's old spot, May 20, has now been snapped up by Pirates of the Caribbean: On Stranger Tides.
Posted by IADW at 6:16 pm