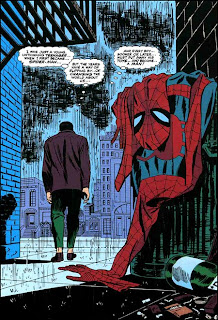 When director Sam Raimi and actor Tobey Maguire swung into movie theaters on the backs of Sony's Spider-Man movie franchise, they broke records and set new standards for how 'comic movies' should be done. Today however that swing has swung, with news Sony will reboot the line, swapping Spider-Man 4 for a high school based revamp, focussing on Peter Parker as a "teenager grappling with both contemporary human problems and amazing super-human crises".

While it does sound like a return to 'classic Spidey', chucking money-makers Raimi and Maguire is a ballsy move for hopefully what will be more than Harry Potter with webs. The 'all new - all different' Spider-Man, based upon a James Vanderbilt script, is set to start production in the next few weeks from Columbia Pictures and Marvel Studios, for a summer 2012 release.
Posted by IADW at 12:37 pm