HIT PICK TO CLICK: SPAWN #200: Five signs this book is an event of biblical proportions: 1) A non DC/Marvel/Archie title hits 200. 2) The new Spawn faces his greatest enemy, who has his oldest one Clown at his side. 3) GOD gets in on the action. 4) Creator Todd McFarlane and Greg Capullo return to interior art duties. 5) Variant covers by McFarlane, Capullo, David Finch, Jim Lee, Rob Liefeld, Marc Silvestri and Ashley Wood.

COVER OF THE MONTH: INVINCIBLE RETURNS #1 (Erik Larsen Variant) (IMAGE). While for me personally, Erik Larsen's art has its ups and downs, in this alternate cover for Invincibles 'new reader friendly' one shot, he manages to add just enough Kirby-factor to Robert Kirkman's breakaway superstar to make him iconic. 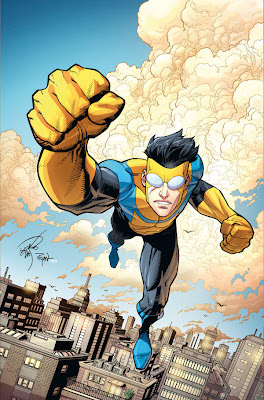