DC vs. THE MASTERS OF THE UNIVERSE: Mattel Makes It Happen 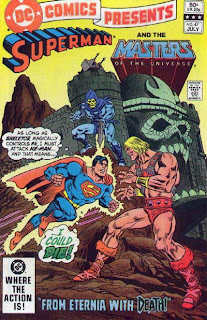 If tracking down a copy of the Superman vs. He-Man slugfest that is DC Comics Presents #47 is proving to be to much of a challenge for your collecting prowess, have no fear, toy giant Mattel is coming to your rescue.

Set to release a line of DC Universe vs. Masters of the Universe action figure two packs, 80's fans will soon be able script their own battles when worlds collide.

The Toys-R-Us exclusives will see a Superman/He-Man action figure 2-pack kick-start the franchise fight-fest in April, complete with a re-print 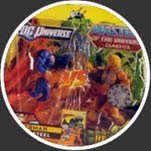 of the inspirational comic from 1982.

The Sorceress vs Zatanna, Teela vs Wonder Woman, Hawkman vs Stratos the possibilities are as awesome as they are endless. And then of course there are the villains....
Posted by IADW at 8:19 am