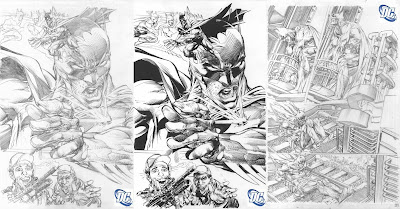 It must be hard for the folks at DC. They pull together two of the biggest talents ever to work on the Dark Knight for one more reunion tour, and in waiting for the content to be done before they solicit it, preview pages flood the internet and let the bat out of the bag. But what can you expect when those two legends are non-other than Frank Miller and Neal Adams?

No one has come close to nailing the bat in the way Neal Adams did in his run with Denny O'Neil, and from the looks of it that Batman is back with a vengeance, in the officially unofficial twelve-issue mini-series, The Odyssey. With Adams rumoured to be pulling the writing chores as well as pencilling, also shown here is a page where Neal lays down his own inks.

Frank Miller will apparently script the tale, with other project inkers rumoured to include Jim Lee's frequent partner-in-crime Scott Williams, and fellow industry icon Kevin Nowlan. Either way this will be one Bat-project no one will want to miss.

[Story via Bleeding Cool]
Posted by IADW at 7:31 am