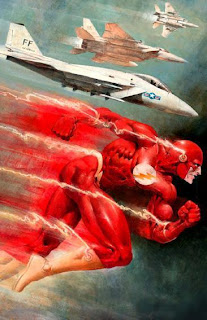 Sure, coming up you have films like Clash of The Titans, Sex in the City 2, and Harry Potter and the Deathly Hallows, but if you are Warner Bros Studios, after that money-making teen wizard waives his magic wand one last time, who do you get to pick up where he left off? According to movie website giant Collider - you nab "the vault of DC Superheroes" and in particular the shiny golden boots of the fastest man alive: The Flash.

Specifically the website reports that during this weeks studio showcase Showest, WB head honcho Alan Horn (who instigated the company's system of having designated "tentpole" films released every year) confirmed the honour of giant mass marketed money spinner, will soon go to the DC Superheroes, after the final instalment of J.K Rowling's breakout hit Harry Potter and the Deathly Hallows Part 2, hits theatres.

While nothing is official yet, apparently the next hero to be announced will be The Flash, once the appropriate director is strapped in for the run. With multiple 'tentpole' films set a year, Flash is reportedly eyed as a 2012 release, alongside the third chapter of Batman.

If confirmed, this will not only guarantee a constant stream of DC to the big screen, but less time treading water for alot of DC's 'other' concepts, like Aquaman, The Atom, and The Legion of Superheroes, who usually have to wait for the likes of the big 'S' to go first.
Posted by IADW at 6:33 pm