DARTH VADER RAPS, BLOODSHOT'S BACK And More, When It Comes To THE CRUNCH

SHOT 1: The guys at CollegeHumour.com have taped Darth Vader's re-worded Jay-Z cover; Galactic Empire State of Mind. Even if raps not your thing, the vid features Stormtroopers, C3PO, the Ewoks, and everyone's favourite Wookie, Chewbacca, getting their groove on while Leia spins the beats. Thankfully, there are few folk in this life who can poke holes in the coolness of that.

SHOT 2: While Kick Ass may not be living up to it's name at the box-office, director Matthew Vaughn is already lining up his next comic-based flick: Bloodshot. What's more, he's such a fan of the Valiant Comics 'frankenstein', that he's looking to finance the tale of the dead mobster brought back to life by the FBI himself. Jump

SHOT 3: How many different ways can you recycle Iron Man? Marvel has released three more Iron Man By Design variants to those I stuck up on IADW a few days ago. Featuring awesome works by Dave Johnson and Humberto Ramos, I'm pinning the blue ribbon on 'Samurai Iron Man' by Skottie Young - the dude is quickly becoming one of my all-time favourite artists - just check him out: 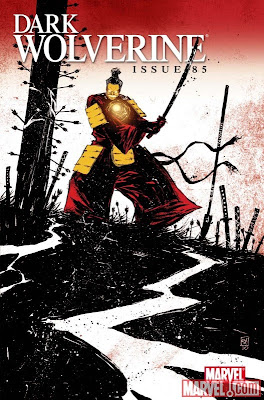