Gail Simone's run on DC's Wonder Woman, took the title out of shaky territory and instantly filled it with a secret sect, nazi's and albino talking warrior gorillas. With that one issue alone (#14), you knew the Warrior Princess was in for a good run and now with what will be over 30 issues to her name, comes news Gail will leave the title, presumably with June's milestone issue Wonder Woman #600. 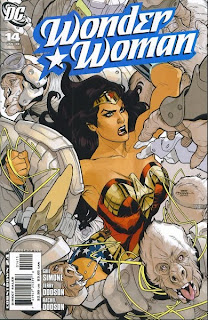 Gail has written 'good-bye and thanks' to all those who supported her run at The Source, CBR blog Comics Should Be Good, and on the CBR Wonder Woman forum, which she regularly used to communicate with fans during the length of her stay.

Having grown and explored Diana's corner of the DCU, as well as promoting 'Wondy' outside of comics (for example, getting behind charitable fundraiser Wonder Woman Day) Gail's unique mix of humour and adventure will be missed, as she moves on to focus on scripting The Secret Six (one of the best books around IMO), The Birds Of Prey, and a new Welcome To Tranquility miniseries for Wildstorm.

Thanks for all the magic Gail - you deffinitly leave big shoes to fill!
Posted by IADW at 1:23 pm