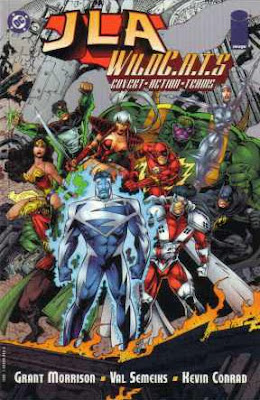 "...to tell the truth I can't honestly see the 'Grifterang' catching on back home."

In this neck of the woods the household name in online auction sites isn't eBay - it's Trade Me. My latest grab; JLA/WildC.A.T's, is a one-shot which pitches the biggest teams of the DC and Wildstorm universes against Epoch: Lord of Time, and the imagination of the often off-beat, but rarely beaten, writer Grant Morrison.

While Morrison characteristically chucks a monkey wrench here and there into the workings of the usual inter-company crossover plot, what really makes this 'fight each other before teaming up to fight the big bad' tale sing, is the character moments dropped along the way. Not just from the Leaguers either, but both sides of the universal divide.

Kid Flash can't see 'Superman' until the electric blue guy acts, Grifter, after a two second tussle with Bats realises there's more to the strangers than meets the eye, and sits down for a cigarette until his team-mates fight their way to the same conclusion, and Majestic smugly warns Superman against using his x-ray vision on him one more time, resulting in him being hit out of the park in the style of Babe Ruth. But hey, did he really think telling Superman 'Don't undress me with your eyes' was going to get him any less? 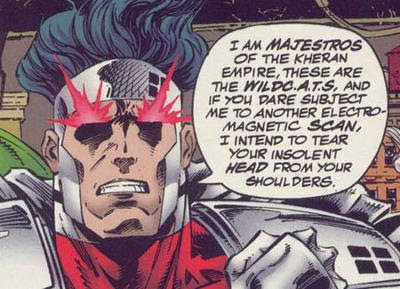 On the art side Val Semeiks keeps the consistency high through the entire book, with a natural gift for rendering Kyle Rayner/Green Lantern, especially in the scenes where he's swapping punch-lines with Wally West/The Flash. While it would have been awesome if the book could've just stretched a bit more to include Martian Manhunter and Voodoo, and Aquaman (who was hook-handed at the time) with Ladytron, this match-up is still great, light, fun, crazy stuff - the kind more books of its nature should embrace.
Posted by IADW at 8:30 am