MOMENTS IN COOL: 'Green Lantern' Makes A Planet Of Kryptonite To Kill Superman

Ever since Doug threw up a post about Doom Patrol in DC Comics Presents at mygreatestadventure80, I've been tripping through my back-issues, looking for the best scene for Moments in Cool. Then I saw the cover to DCCP #26, and everything else instantly went back in the box.

Just look at it - Green Lantern is killing Superman with a planet of Kryptonite! Like you're not gonna chuck down a few bucks to take that home. 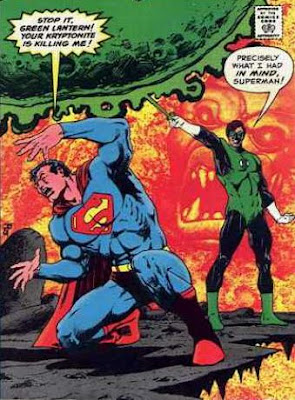 If you've already figured that can't be Hal, you'd be right. However you might not have guessed it's really N'Gon; a monstrous serial-killing space alien, who absorbs the powers and replicates the body of his prey, before luring the fallen's most powerful ally into his trap.

Having knocked off Green Lantern/Hal Jordan, but not before Hal could split his spirit from his body (just run with it), N'Gon summons Superman. As Hal jumps back into his now ring-less body, N'Gon uses the hijacked power-ring to create a giant planet of Kryptonite to kill Kal-El. That leaves Jordan helpless to prevent the death of his friend, until he clicks on to the fact that all he needs to battle the most powerful weapon in the universe, is to lay his hands on one of the first. 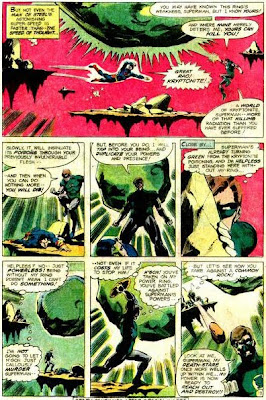 Find this moment in DC Comics Presents #26, by writer Marv Wolfman, and illustrator Jim Starlin, for a limited time here at Amazon.com
Posted by IADW at 8:03 pm