The last few days while the pre-set posts have ticked over on IADW, I have been trapped at home 'resting', after undergoing surgery.

Not really a guy who can sit still at the best of times, "bed-rest" was the worst part of all. In fact I've firmly decided that now I'm back on my feet, I need to paint something on the bedroom ceiling, so should I ever land back in the same position again, I'll have at least one psychedelic vision to help break up the day. Then I woke up to this... 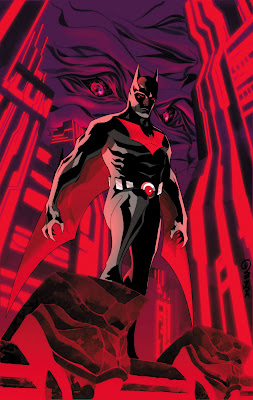 'Cool' doesn't describe it. After years of future gazing, hit animated series Batman Beyond finally gets it's own 'general audience' comic this June - granted it's only a 6 issue mini - but what a mini it could be.

While it's a bit of a leap from the shows sleek 'Bruce Timm' illustration style, to the more ripped look shown by cover artist Dustin Nguyen, Dustin always delivers and here is no exception. Picking up on the core visual trait of the source material, the cover balances a strong futuristic neon look, with the classic 'vibe' of Gotham, and it's need for a 'Dark Knight'. Hell, it reminds me of why I used to chuck the DVD on, just to see the opening credits!

For more on June's debut issue click the jump, but to relive your own fix of that opening sequence, well just click right here ->