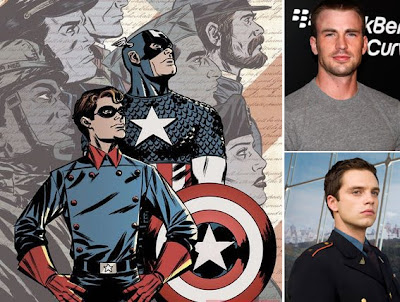 Not only has Marvel finally confirmed actor Chris Evans (The Losers, Sunshine) will play Cap in the upcoming movie, The First Avenger: Captain America, they have also nailed down the man who will be playing his WWII sidekick Bucky Barnes; Sebastian Stan. Yeah, 'Who's that?' was my gut response too.

A relative newbie, Sebastian's main claim to fame lies in stints on Gossip Girl, the short-lived Kings and the recent Hot Tub Time Machine. While Marvel will only confirm the role is Shaw's, The Hollywood Reporter claims the young actor has being signed to a 5-6 picture deal, which hints at Ed Brubaker's seminal Winter Soldier story arc been positioned for future shield-slinging sequels.

With Cap and Bucky now officially sorted, all eyes turn to who will land the roles of the other Invaders, Sharon Carter and of course The Red Skull.
Posted by IADW at 9:27 am