Cult Marvel To Hit Hollywood, Iron Man's Best Suit Ever, And More - All When It Comes To THE CRUNCH

SHOT 1: Marvel Studios are creating feature films for the likes of Dr. Strange, (hopefully Iron Fist), Power Pack and more. Without the need to appeal to every man, woman and their dog to break even, these 20-40 million dollar “small budget films” will be able to take a few more risks in bringing these cult heroes to the big screen! Jump

SHOT 2: Sticking with the stars of the minor leagues, Ben Morse at The Cool Kidz Table has a great post looking at comic folk that debuted with a bang, but have now sadly settled for much less. From The Ray to Spider-Woman II, you can check them all out after the jump.

SHOT 3: Slipping it in before I forget to yet again, the fact that Tony Stark donned the classic 80’s Iron Man armour to help K.O Norman Osborn in SEIGE #3 was just pure class. Sure it may not look like the most technical thing on the planet, but IMO it’s still the best set of duds Tony’s ever worn. 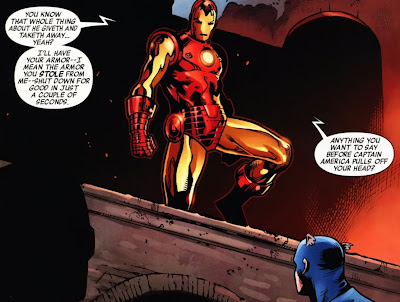