PANEL-BEATER: Comic Of The Month:
Batman and Robin #11

I really thought this was going to be S.H.I.E.L.D. #1. Instead however, writer Grant Morrison turns Batman and Robin #11, part of the lead up to the Bat-Pirate starring mini-series The Return Of Bruce Wayne, into the ground he excels most on - a book with numerous plot threads all coming to a head and a last page revelation that no one saw coming. 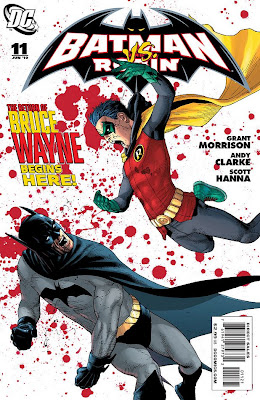 As Dick Grayson/ Batman, explores a labyrinth of hidden tunnels beneath Wayne Manor, filled with clues to the location of Bruce Wayne, Oberon Sexton and the 'new' Robin, Damian battle through rouges tied to the mysterious 'Domino' and then at the hands of each other, in the shadow of 99 fiends.

Why at the hands of each other? It seems 'Mother of the Year' Talia Al Ghul didn't trust her son to infiltrate the bat-ranks and planted a motor control device in his spine, earlier in the series, when her Doctors saved his life. Now as a mother with a child who actually does as they're told, she hands the controls over to one of DC's premiere bad-asses, in a shock move that sets up next issues ultimate fan showdown - with the remote controlled puppet now set on killing an exhausted Dick Grayson.

See? Many have made a great Dark Knight story, but what makes for a great Dark Knight Detective tale, is when you as a reader can pick up the clues too, and try to out-race 'Batman' at his own game. This issue has that ability in droves. Chief of them all, Oberon Sexton's true identity, which hits a high note mid-issue, as a pre-controlled Damian asks the mystery man if he is truly his father; Bruce Wayne.

While Sexton has little time to confirm or deny, the truth is set to be revealed next issue, and if Morrison stays on form it's sure to be a doozy. So flip back through those recent issues of Batman and Robin now, or jump on board and join in. There's only a few days left to place your bets, that is if Talia's guest doesn't kill the current 'Batman' first...