THE USUAL SUSPECTS: Secret Six Toys and Where The Fantastic Four Should Join In

Forget the Sovereign Seven and the Fearsome Five, Marvel's Fantastic Four and DC's Secret Six is where it's at. Now sit back and take in a bit of news from the world of each, right here with The Usual Suspects.

SECRET SIX: Where are the action figures? Sure Bane has a few thousand as part of the monthly new toy line inducing Bat-franchise, and Deadshot may have one or two as well, but how about Ragdoll, Black Alice, and Catman?! It's enough to make you make your own... 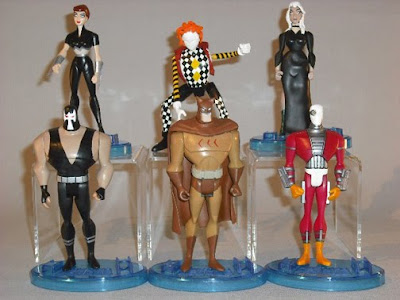 These home-made 'sixers' from CustomCon 25, done in the JLU style, would be perfect for the work-desk, and finally allow you to enact that Secret Six vs. Transformers battle, that you know your Decepticon G1 toys are just asking for. [Story via ToyMania]

FANTASTIC FOUR: Ok, I'm just going to say it, I don't get why the Fantastic Four get left out of all Marvel's massive cosmic crossovers. Sure having the FF drop in may overshadow some of the guys, but with the Silver Surfer, Inhumans and Thanos already in the mix, it's bizarre that they're invisible to the story. 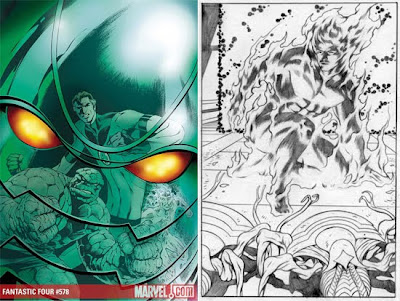 Not that I'd want Jonathan Hickman's plans to be thrown outta whack. He's obviously building towards something massive, and the teaser for issue 578 that hit at Newsarama shows he's not only setting up the Annihilation creating Annihilus, things dont look good for the Human Torch either! Check the full preview after the jump.
Posted by IADW at 9:35 am