HIT PICK TO CLICK: BATMAN: THE RETURN OF BRUCE WAYNE #1: Time machines are for wimps, just ask Bruce Wayne. Been a real man, he's crawling his way back to the present, era by era. Square one; Bruce as the Bat-Caveman, complete with a giant skinned bat war mask. Yip - I freakin' love the craziness of comics.

CLOSE CONTENDERS:
SECRET AVENGERS #1 (DC): How can you be the 'Secret' Avengers when your line-up includes a shiny war machine, a human rocket and a big blue bouncing beast? Stuff like that's hard to keep hidden. Luckily Black Widow, Antman, Steve Rogers and Moon Knight know about espionage, not picking up blue fur though, but hey no one's perfect.

LEGION OF SUPER-HEROES #1 (DC): Legendary LOSH writer Paul Levitz returns to the 31st century, with rising star artist Yildiray Cinar in tow. Make it an oversized issue, with a Jim Lee variant and forget it - DC's biggest sci-fi franchise has never been in better hands! 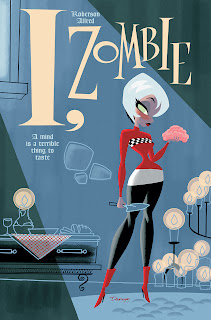 AVENGERS #1 (Marvel): Considering the rest of this list includes returning icons, Avengers, and cosmic scale books I guess this one fits. Well, that is until Marvel relaunches Guardians of the Galaxy as Wolverine and the Cosmic Avengers...

I, ZOMBIE #1 (Vertigo): While eating human brains would send us running from the table, for Gwen Dylan, it sets her zombie-self on a danger filled trek, to fulfil the last requests of her latest meal. Now that's indigestion. Plus it's a first issue for only a buck! Mmm tasty!
Posted by IADW at 8:00 am