Tonight, I saw Iron Man 2 for the second time. I enjoyed it as much as the last blast through, thought War Machine was cooler this time round, but what really caught me out, was the thoughts of friends I went with, ones who aren't comic fans.

While they all agreed the film was good and they enjoyed seeing it, afterwards talk favoured the initial blockbuster, with a few feeling IM2 lost it's way when Samuel L. Jackson entered the film, and took a while to get back on it's feet again. Without giving stuff away, this is where some of the key 'road to The Avengers' moments are. 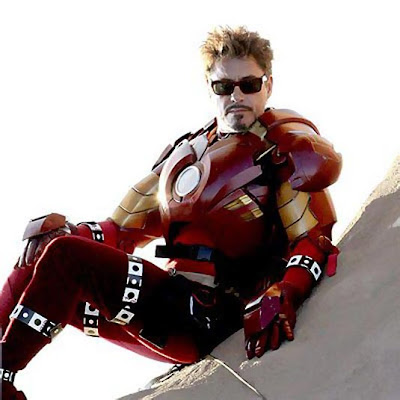 While in a 'Neo and the Matrix' way comic fans can see how these scenes are building blocks, even when I explained that Nick Fury didn't just appear, but was in an end of credit scene in the original, and that its all leading to something bigger - the consenus remained that 'an independant film should still be enjoyable as an independant film'.
I can't share their perspective, but they do have a point.

Don't get me wrong - I still think IM2 is awesome, and stand 110% behind my earlier review, but it does give me an even greater appreciation of the folks at Marvel Studios (and soon presumably DC Entertainment) who, in the hopes of creating a shared universe on screen, have now got to balance the needs of a shared audience off screen - both those in the know and those in the learning.

Now that really is a job for Earth's Mightiest...
Posted by IADW at 9:38 pm